Valve lifters may be small, inexpensive parts, but they’re essential to the operation of your engine. If you're wondering what valve lifters are, you came to the right place. We'll talk about:

We're going to focus on hydraulic valve lifters, which have become very common in the last 20 or 30 years. There are also mechanical valve lifters, but they are less frequently used today.

There are two valve lifters in each engine cylinder. The design of a valve lifter depends on the engine. Some valve lifter designs are more complex than others. It can be a hollow bucket or a small hydraulic tube that's about 3 or 4 inches tall. 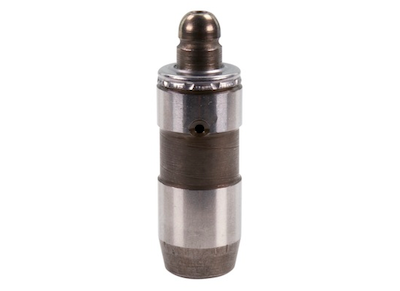 The bottom of a valve lifter may look flat, but it's actually slightly convex. It's so the lifter can rotate as the camshaft turns, which helps it last longer.

What Does A Valve Lifter Do?

First of all, let's be clear that valve lifters are found in engines that use pushrods as part of the drivetrain. This is still common in many V-8 engines. Smaller, overhead cam engines, do not use pushrods, and therefore do not have valve lifters.

A hydraulic valve lifter is also called a hydraulic tappet. Many years ago, in flathead engines, mechanical valve lifters actually pushed a valve upwards. The name stuck, but these days, the valve actually moves downwards. Let's take a look at how a lifter works in more detail.

The camshaft has a bunch of egg-shaped cam lobes on it. There are two valves per cylinder on most pushrod V-8 engines, so most camshafts have 16 lobes. The bottom end of each valve lifter rests on a cam lobe. As the camshaft spins the cam lobes cause the valve lifters to move up and down. A pushrod rests on each lifter, and the top end of each pushrod pushes upwards on a rocker arm. A rocker arm is kind of like a teeter-totter that works in reverse. As the pushrod pushes upwards on one end of the rocker arm, the other end of the rocker arm moves downward, and pushes on the top of the valve stem. This causes the valve to open in a downwards direction.

There are typically two valve stems for each cylinder:

To put it simply, a valve lifter transfers the motions of the cam lobe to the pushrod or rocker to open and close the valve. Valve lifters are a simple part, but they are made to very precise dimensions. If the lifter is too long, the valve won't fully close, and if it's too short, the valve won't fully open. So it's important to use the correct-sized valve lifter to ensure appropriate valve timing. That's why it's always smart to shop OEM when you need replacement lifters.

If you're a visual person, here's a gif of the process from this video:

What Is The Difference Between Mechanical and Hydraulic Valve Lifters?

Mechanical valve lifters are also called solid lifters. They a solid piece of metal made to precise dimensions. As they wear, the valve train has to be adjusted to accommodate the wear. This keeps the engine running quietly and smoothly. Adjustment has to be done fairly frequently. One some engines this is as often as every 15 or 30 thousand miles.

Why Are Valve Lifters Important?

Valve lifters help to control the combustion process by letting fuel in, and exhaust out. When valve lifters wear out, your valves can't open or close properly. This reduces the amount of power the engine can produce. When one of your valve lifters goes bad, one of the two scenarios can happen:

Either way, it throws off the engine's valve timing, and the engine won't run as well as it should.

The Biggest Telltale Sign Of A Bad Valve Lifter

Valve lifters can go bad after a long time due to several factors:

The biggest telltale sign that you need a new valve lifter is a distinct noise coming from the engine. To be more specific, a tapping noise that’s quick in rhythm. The noise is usually easiest to hear at idle.

The best thing to do when one of your valve lifters fails is to replace it as soon as possible. If you ignore the problem long enough, related engine parts will wear out faster. These parts include the:

What If You Need To Replace Your Valve Lifters?

If you believe that one or more of your valve lifters has gone bad, you don't have to take your Ford to a shop. You can replace them right at home! You'll save a lot of money on labor and replacement valve lifters.

It's important to note that it's a good idea to replace all of your valve lifters at once, even if one of them has gone bad. If one is bad, then chances are the rest will fail soon. It's easier to take care of all the lifters at once.