An EPA official declared that by 2025, when the CAFE regulations take full effect, 90 percent of the vehicles on the market will have turbocharged engines. Sound familiar, Ford fans? That is the same engine technology in the EcoBoost engines. Looks like Ford is the only one on the right track. 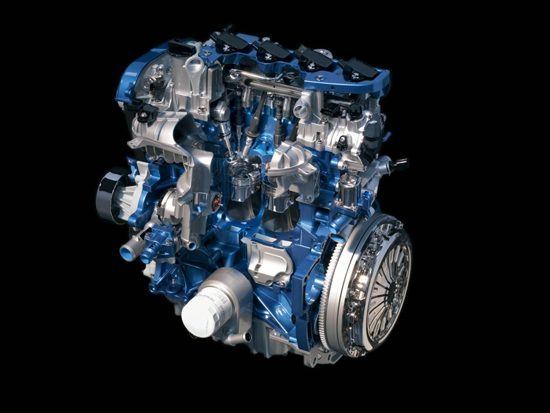 An EPA official has said that turbocharged engines like this Ford EcoBoost are the future of the automotive market.

At the recent SAE World Congress,  Edward Nam, director of the EPA’s Light Duty Vehicles & Small Engines Center in Ann Arbor, MI said the next-generation of turbochargers will make up 90 percent of the engines in vehicles in 2025. Currently, turbochargers generally are "limited to 261 psi (18 bar) of brake mean effective pressure, but that 348-psi (24-bar) units will be in the market by 2016 and used widely by 2025," according to WardsAuto.com.

For those who don't know, the mean effective pressure is a measure of the average pressure over a cycle in the combustion chamber of the engine. Thus, by creating more pressure with less engine, the vehicle is more fuel efficient.

This is the idea of the twin turbochargers in the Ford EcoBoost engines. Ford is able to offer a smaller engine that is just as efficient as the larger displacement engines.

Nam goes on to say that while turbocharged engine development will create a 392-psi (27-bar) model, developing an 8-speed transmission is also key. These transmissions allow vehicles to run at lower RPMs. Ford recently signed an agreement with GM to continue developing these gear boxes.

"We believe turbochargers will improve over time, and we believe engines will be able to improve over time," Nam told WardsAuto. "So that means that a vehicle like a Ford F-150 or Chevy Silverado (pickup truck) being run with a 4-cyl. engine."

According to EPA estimates, new turbocharged engines could save 4 billion barrels of oil and slash greenhouse-gas emissions by 2.2 billion tons (2 billion t) between 2017 and 2025. Consumers could see a lifetime fuel savings at around $5,700 to $7,400 (based on $3.87 per gallon). This should offset the anticipated vehicle price increase of $1,800 Nam says.

New engines and transmissions won't be the only advancements to help automakers reach the 2025 goals. Other advancements will come in the way of an increase in diesels, improved aerodynamics, and improved tires that have better rolling resistance.

"We believe most auto makers should be able to meet the standards largely through advancements in internal-combustion engines and improvements in emissions," Nan told WardsAuto. There’s a wide range of technologies available to help meet the standards."

What does this all mean? The future of a half-ton truck is in the Atlas pickup concept that Ford already has.

What do you think? Do you agree with the EPA that turbocharged engines are the future?