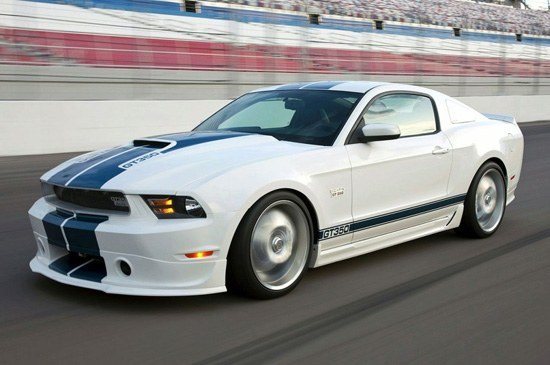 Rumors have it that Ford is looking into bringing back the GT350 as a special edition in 2014. Currently, you can only get one from Shelby directly.
Ford has had a long run with the Shelby lineup of cars including the GT500. That car has been a part of the Mustang lineup since 2007. The GT350 made a debut and comeback in 2011 when Ford put in a 5.0 liter Coyote motor. At the time, Carrol Shelby (now deceased) had wanted to bring back the GT350 albeit with a modern Mustang look. He also wanted to wait on a better motor.

According to MustangEvolution.com, the 2011 Ford Mustang Shelby GT350 has had some criticism over the body kit and exorbitant price. However, it is still a beast on the race track. While the sticker price is high, its "track prowess and legendary pedigree" are nothing except spectacular.

Now you can buy a Shelby GT350 today, albiet, through the Shelby Headquarters in Las Vegas, Nevada. They will take a stock Mustang and add the GT350 package. Although, the price increase from the stock Mustang at a mid $30,000 to a $70,000 GT350 is a lot to swallow.

On the flip side, you could buy a GT500 from Ford. They have been able to keep the cost low while offering lots of performance. A GT500 "represents over 660 horsepower in a modern, sophisticated, comfortable, drivable super car for less than $55,000," according to MustangEvolution.com.

When it is all said and done, the differences between the GT350 and GT500 aren't much and there is no big disadvantage to either since they will both hold their value.

Why would Ford offer a GT350? Frankly, it would increase their lineup and keep the revenue in house instead of going to Shelby.

What are the specific rumors? MustangEvolution.com says the following could happen:

This is great news for Mustang fans. Ford would sell a GT350 for less than the GT500 (the way it should be) and it would continue the Shelby legacy. It will be interesting to see if this Mustang rumor pans out, but it does look very promising.