With the Ford Mustang's 50th anniversary approaching rumors about a future design are flooding the internet. Now, there are some clay models that seem to depict one design direction. Are these clay models fact or fiction for the 6th generation Mustang?

Is this clay model of a Mustang the 2015 version or an old design exercise?

The Mustang clay models first appeared on Mustang6g Forums and quickly spread across many sites. Most of the sites seems to think that these clay models are the future design of the 2015 Mustang. These models seem to depict a more European look which makes sense with the news that the Ford Mustang will be offered in Europe albeit with a more fuel efficient 2.3L EcoBoost engine.

Other sites like Jalopnik.com suggest that the images aren't of a new Mustang. The images look to nice (see:no cell phone photos) and don't look like traditional "spy" photos at all. In fact, these suspicions lead Jalopnik to contact Ford. A Ford spokesman reportedly told them that "these images are from a blogger event held in Dearborn, MI last year to show off some design studies." 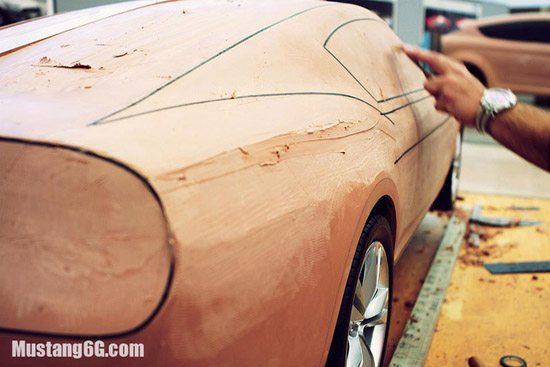 This clay model shows a fastback rear end. Will this be a design feature of the 2015 Mustang?

Whether these clay models are the real thing or not, remains to be seen. It is clear that the look is a decidedly an Aston Martin-inspired nose and fastback rear. It wouldn't surprise anyone if this is the direction the new Mustang goes with the new European competition.

These photos, a Ford leak or not, are really great examples of the amount of time and energy manufactures go through when considering a new design. By building these clay replicas, it gives everyone involved a better sense of how the car will actually look.

What do you think of these photos? Fact or fiction, the new 2015 will look like this?