It’s time to change the oil in your F-150. You’re standing in the oil aisle of the parts store down the street, just staring at all of the different-colored bottles and wide-ranging numbers. Which one do you choose?

To get a better grasp of what works best in your Ford, let’s take a brief look at some of the revisions made from the 1997 model year to now.

For 1997, Ford majorly redesigned the F-150 for the first time since 1980. Rounder styling, more interior space and an all-new engine lineup were the 10th generation’s hallmarks.

In 2009 Ford dropped the 4.2-liter V6 due to the closure of the Essex plant in Windsor, Ontario. Two versions of the 4.6 liter (two- and three-valve variants) and the three-valve 5.4 remained.
FoMoCo got busy again for the 2011 lineup (beginning of the 12th generation) and offered an all-new selection of powerplants. Six cylinders returned with the base 3.7 and optional direct-injection 3.5-liter EcoBoost V6. Both V8s were replaced — the 4.6 was bumped by the 5.0, and the 5.4 gave way to a 6.2. 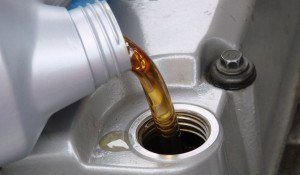 Ford advised, and was shipping vehicles from the factory with, SAE 5W-30 motor oil in the majority of their engines since the 1990s. Then in January 2002, Ford issued a Technical Service Bulletin now recommending the use of SAE 5W-20 instead of SAE 5W-30 motor oil. The 4.2-liter V6, 4.6-liter V8 and 5.4-liter V8 from 1997 to 2002 were all listed as vehicles to be serviced with the new recommendation. It was “an improved formulation to improve fuel economy.” From 2002 onward Ford recommended SAE 5W-20 in almost all of their engines (4.2-liter to the 6.2-liter); the exception being the 3.5-liter EcoBoost. They recommend SAE 5W-30 for the direct-injection six cylinder.

Ford advocates multigrade oil usage rather than single grade due to its wider temperature operating range.

What is synthetic oil?

Now that we know the factory’s preferred grade, what’s the difference between the quart of oil that costs $5 and the quart that costs $10?

The difference in price between the different oils comes primarily from the synthesis procedure. Synthetic oil is not refined from whole crude oil like conventional motor oil is. Synthetic is distilled, purified and broken down into its basic molecules. It contains ingredients that are artificially created and added to the petroleum base.

During the process to create synthetic oil the hydrocarbon molecules become uniform in size, shape and weight. This allows the oil to provide superior chemical and mechanical properties when compared with conventional motor oil. Better wear protection, resistance to oxidation and thermal breakdown, and decreased evaporative losses are some of the benefits synthetic oil brings to your engine. All of it adds up to increased horsepower, improved gas mileage and smoother engine operation. 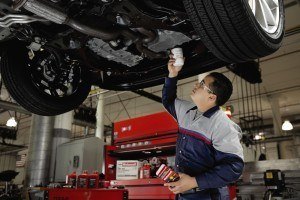 Should you use synthetic oil in your engine?

Simply put, it is a superior product. The only detractor is price, but that can be mitigated by the extended service intervals. Many vehicles don’t need an oil change for 10,000 or 15,000 miles.

Early commercially available synthetic oils garnered a reputation for ruining seals and causing leaks, but that just doesn’t happen by switching between the oils. Synthetic oil is 100% compatible with modern automotive gasket and seals. If the engine leaks with synthetic, it will leak with conventional.

What about synthetic blends?

Ford’s own Motorcraft brand is a synthetic blend. It’s what came new in your truck (2003 model year and later), but they aren’t the only ones that will work. Typical blends have no more than 30% synthetic oil mixed with the standard base. The blend is a compromise between conventional oil’s price and full synthetic’s performance.

Always double check what your specific owner’s manual states, and make sure the bottle you pour in meets or exceeds the vehicle’s correct specifications.