The Ford SVT Raptor was already one cool off-road machine. What happens when you amp up the horsepower and throw the Shelby name on the side? Sorry other competitors, this truck is the far and away the truck for off-roading! 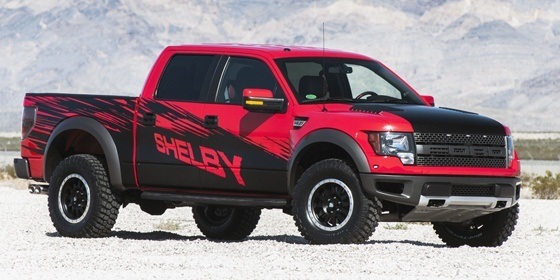 The performance gurus over at Shelby American Inc. have made a name for modifying stock Ford products into really cool tools. The Shelby Ford SVT Raptor is no exception with now 575-hp (411-hp normally). The truck has that special Shelby touch to it with graphics, suspension modifications, custom interior and interior upgrades to match according to PickupTrucks.com.

Shelby says it will build the modified truck at its headquarters in Las Vegas, NV. The base upgrade to the Raptor is $18,000 and will include the aforementioned plus a supercharger. Shelby has also said the plan is to limit production to 100 units per year to drive up demand.

“Aerodynamically speaking, the Raptor was engineered for maximum performance,” said Gary Patterson, vice president of operations. “We spent our efforts improving the power, cooling and handling systems because every Shelby is built to excel under even the most extreme conditions.”

While it is ultimately a very expensive upgrade on an already expensive toy, the cool factor and also performance upgrades are worth it to the avid off-roader. With the 'Stang owners having the Shelby option for years, it will be interesting to see how the Raptor owners respond.

“The Shelby American line up now has something for everybody,” added Luft. “We continue to offer the legendary Cobra sports car, along with our GTS, GT350, Super Snake and Shelby 1000 based on the current Ford Mustang and Ford Shelby GT500 vehicles. We took a page out of our history by bringing back Carroll’s beloved front wheel drive ‘pocket rocket’ with the Shelby Focus ST. Since Shelby American’s first official appearance was at the New York Auto Show over 50 years ago, it’s fitting that our ‘biggest and baddest’ product unveil of the year, the Shelby Raptor truck, would occur in Manhattan.”

Will Shelby hit the 100 limit each year? We think so. How about you?