Scientists have determined that cooking a charbroiled hamburger emits the same air pollution as driving a heavy-duty truck for 143 miles. Does this prove EPA regulations are too stringent or should be ban charbroiling hamburgers? 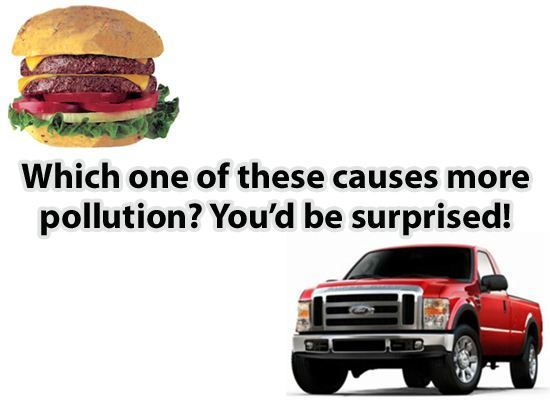 In a surprising scientific study, it was determined that charbroiled hamburgers pollute as much as driving a heavy-duty diesel truck.

The researchers at the University of California recently came to this conclusion according to a story in the NY Times. The schools' principal investigator told the NY Times that while this may seem counterintuitive the "hamburger’s role in air pollution stands out as other sources of particulate emissions, like cars and trucks, have undertaken heavy regulatory diets."

“As of today, we estimate that the hamburger’s contribution of particulate matter to ambient atmosphere is twice that of all the on-road diesel vehicles,” Mr. Welch said in a telephone interview with the NY Times. “It’s really a testament to the advances in technology in diesel engines.”

The University has produced a study that was apparently financed by two air-quality districts in California. The study took place in the South Coast Air Basin that includes parts of Orange County, portions of other surrounding counties that include cities like Los Angeles and Riverside. Mr. Welch found that charbroiled burgers emit 33 pounds of particulate matter per 1,000 pounds of meat cook. In real-world terms, a typical 1/3 pound patty emits five grams of particles. This compares to a diesel truck emitting 35 milligrams per mile for 143 miles to equal the same amount of soot (1,000 milligrams per 1 gram).

“Generally, clean diesels are matched up against natural gas, hybrids or electric vehicles,” Allen Schaeffer, executive director of the Diesel Technology Forum, a nonprofit diesel-advocacy group, was quoted as saying in the NY Times article. “This is the first time we've gone head-to-head against fast food.”

Apparently the big issue is at the grill whose open flame heats up to 800-900 degrees. These grills known as "open-underfired broilers" are the worst emitters of soot.

This isn't to say that your local McDonald's is a huge air polluter since they often use a griddle to fry burgers  and cook them at a lower temperature which doesn't produce much particulate.

It took the researchers about 4,000 pounds of meat since May, 2012 to come to this conclusion. The majority of this food goes to college students and food kitchens.

What do you think? Does this illustrate the problems that critics have with the EPA or is this just an odd coincidence?