The Ford Contour SVT may have had a limited production run, yet it has an active fan base. What makes this car so special?

The Ford Contour SVT was a quick performance car that sadly has been mostly forgotten about.

To understand what made the SVT Contour special, you have to understand that the base Contour was designed to be a sporty sedan with a European feel (it was based on Ford's Mondeo, a fairly successful European model). The SVT was intended to be an even sportier, even more sophisticated version of the sporty and sophisticated car it was based upon...

The standard Ford Contour was available in three trim levels: the base GL, the more luxurious LX, and the SE sport. It was offered with either a 125hp  2.0L 4 cylinder or a 2.5L Duratec V6 that pumped out a respectable (for the time) 170hp and 165lb-ft of torque. Paired with a standard 5-speed manual, the base Contour wasn't a bad car at all. Edmunds.com writes:

the Contour had a decidedly European feel to it thanks to its spirited performance, composed handling and aerodynamic styling...In reviews and road tests, we showered great praise upon the Ford Contour -- especially the SE and SVT versions

In a decision to both a) produce an even more critically acclaimed Contour and b) add a profitable premium trim level, Ford produced an SVT version of the Contour (similar to the SVT Focus, SVT F-150 Lightning, and SVT Cobra Mustang of the same era). The SVT model came out in 2008 with a specially tuned and modified 2.5L V6 that could produce 195hp (later upped to 200hp), mostly thru improved internals. Capable of a 7.5 second 0-60 time, and a sub 16 second quarter mile, the SVT Contour was a decently sporty sedan for the price. 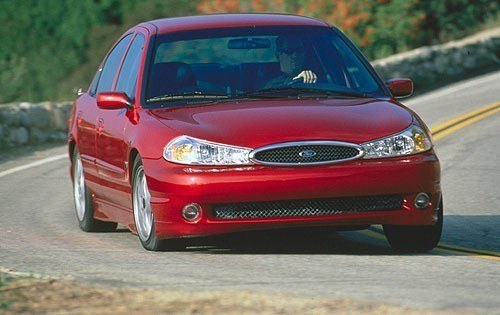 Front view of the SVT Contour via Edmunds.com

To make sure everyone knew the SVT Contour was indeed fast, the engine upgrades were mated with sporty bodywork, SVT seats and trim, white-faced gauges, larger wheels with ultra high performance tires, upgraded brakes and a re-tuned suspension. 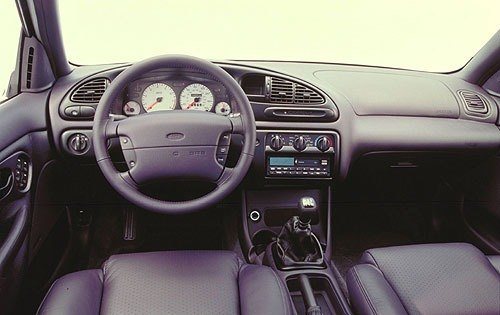 The SVT package included upgraded trim, and the SVT's interior was quite nice considering the low price point (and contemporary Ford interiors).

While this edition was only really available as a special order from select dealers, it did gain a lot of fan fare from the media. In fact, Edmunds.com named the Contour SVT the most wanted sedan under $25,000 for the year of 1999.

Sadly, the Contour couldn't find its niche. The car had terrible resale value (a result of Ford's rampant rental car fleet Contour sales), a lack of marketing support, and a tough to identify audience...it was too small to be a mid-size sedan, yet too pricey to compete with economical sedans of the time. Basically, the car was probably a little too European for American taste. It was discontinued in 2000.

The car though has lived on through fan clubs and online forums like  Contour.org (The Contour Enthusiasts Group), and we've gathered some photos from various sources below.

Do you remember the Ford Contour SVT? Do you own one? Let us know in the comments!