Ford will offer a new special edition of its hugely popular F-150 SVT Raptor in 2014. Although, it is just cosmetic changes, it add a really cool trim level choice. 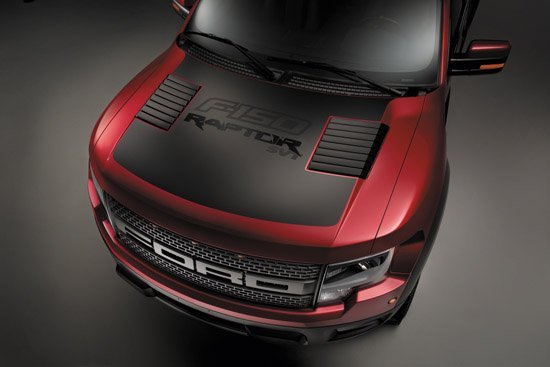 The Ford F-150 SVT Raptor has really been a hot seller for Ford with as many as 13,000 units sold in 2012 - up 14 percent so far in 2013. The new Special Edition will have, according to Ford, "unique new touches to Raptor’s existing Luxury Package, including a Ruby Red Metallic exterior color and box-side graphics. Interior upgrades include Brick Red seat bolsters with black inserts and cloth honeycomb highlights, console top finish panel, and center stack and door panel appliqué accents. Raptor Special Edition is also available in Tuxedo Black Metallic."

"Raptor owners are looking for a high-performing, uncompromising off-road pickup truck with the features and luxuries found in today’s premium trucks," said Doug Scott, Ford truck group marketing manager. "Since its launch in 2009, we've continually moved Raptor forward in capability and design, and the 2014 Special Edition is the best Raptor yet."

Since being introduced in 2009, the Raptor has simply torn up the competition. It is the best, stock off-roading machine available, period. It comes with an exclusive 6.2-liter V8 engine that produces 411 horsepower and 434 lb.-ft. of torque.

Over the years, Ford has listened to customer feedback and added a four-door SuperCrew model, grille-mounted camera to improve the driver's visibility when climbing over rocks and industry-exclusive beadlock-capable wheels.

The new special edition will go on sale this fall, no word on price.