Ford is bringing three custom Ford F-series pickup trucks to the 2012 SEMA show. Each one is sure to attract a large audience. 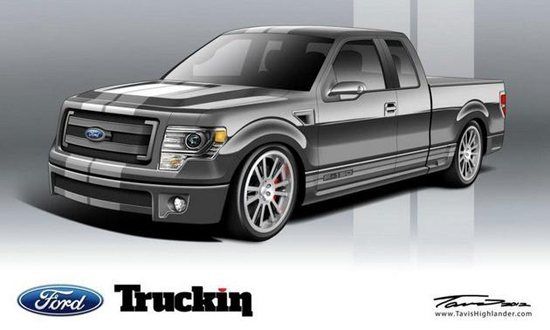 According to an article in Autoweek, the three Ford F-series pickups will be on display at the 2012 SEMA show. The truck pictured above was created by Truckin' Magazine and pays homage to a GT500.

The light gray Shelby-like stripes run from bumper to bumper and are matched with gray paint. In order to give it more of a "truck track-like handling," Truckin' Magazine gave it unique wheels/tires and lowered the body be a few inches. It also upgraded the brakes and added a more "luxurious interior." It is powered by the extremely popular twin-turbo EcoBoost V-6 engine. 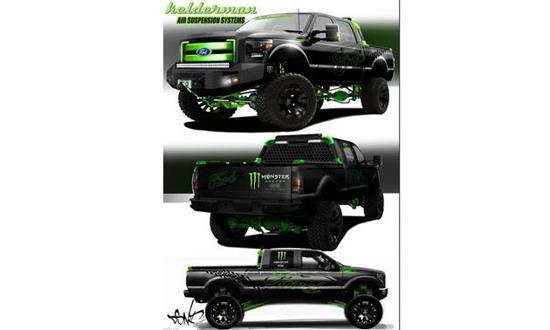 This F-250 rides on lots of custom suspension systems provided by Kelderman Air Suspension Systems. It will be at the 2012 SEMA show.

Also, making an appearance will be a F-250 customized by Kelderman Air Suspension Systems that is painted black with electric green accents. The Super Duty truck is powered by a 6.7-liter PowerStroke diesel engine with an extra 8-10 inches of ground clearance. The truck is full of suspension upgrades like an AccuAir TouchPad air suspension management system and Sway-A-Way remote reservoir shock absorbers. 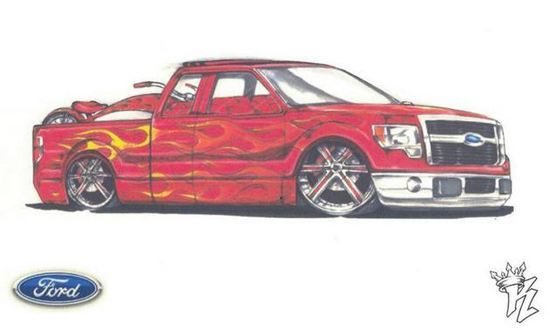 This illustration of K-Daddyz Kustomz F-150 sure does look fast. The real thing will be at the 2012 SEMA show and is sure to delight.

Last, but not least, is this concept photo of what the K-Daddyz Kustomz F-150 will look like. It has a red paint job with flames that turn to orange as it moves to the rear. The 24-inch wheels keep the red paint flowing as they sport the matching color. It has a lowered chassis. The paint job looks fast and the truck doesn't disappoint with a 5.0-liter supercharged V-8 under the hood. As you would imagine all this exterior work is combined with a kicking Rockford Fosgate sound system inside.

What do you think? Which one is your favorite?