Ford recently built the one millionth Mustang at its Flat Rock plant on the eve of its 50th anniversary. With changes on the horizon, could this be one of the last 5th generation Mustangs built? What will the next generation Mustang Flat Rock builds look like? 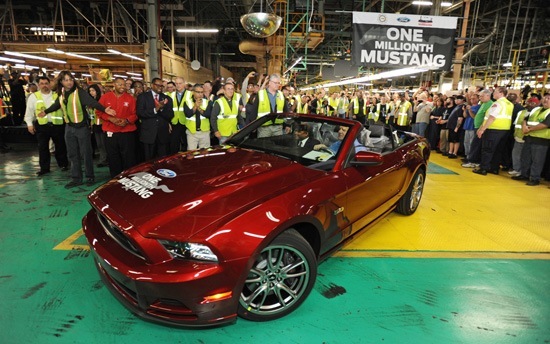 With Flat Rock celebrating the one millionth Mustang built, fans are wondering if this will be one of the last 5th generations built.

The Ford Mustang first appeared in New York, 1964. Since then it has been an icon of American muscle cars with dozens of different trim lines, powertrains and special designer editions. For the past nine years it has been built in the Flat Rock, MI assembly plant.

Celebrating the accomplishment at the Flat Rock Assembly Plant was Raj Nair, group vice president for global product development. He got the opportunity to drive a Rudy Red 2014 Mustang convertible off the assembly line with 27-year Flat Rock employee Ed Salna, material planning and logistics manager at the plant.

"Mustang is one of the most beloved nameplates in the industry, with fans around the world and throughout Ford Motor Company," said Nair in a press release. "The team here at Flat Rock Assembly has built an outstanding reputation for quality while producing one million Mustangs over the last nine years, and we expect that to continue for many years to come."

According to Ford: Introduced in April 1964, Mustang proved to be far more popular than anyone expected, prompting Ford to add production capacity outside Michigan. By early 1965 plants in Metuchen, N.J. and San Jose, Calif. were also building Mustang. Less than two years later, on Wednesday, March 2, 1966, the one-millionth Mustang rolled off the line in Dearborn. To date, Ford has produced and sold more than 8.5 million Mustangs.

The Flat Rock Assembly plant has had the opportunity to build several special Mustang models like:

Next year will mark the 50th anniversary of the Ford Mustang. While U.S. production of the car is going strong, there are some concerns about what the next generation will look like and what a European version will look like.  Many analysts think the next generation Mustang will have to make concessions to reach MPG targets both in the U.S. and in Europe. The European design could also get toned down quite a bit to better compete with that market.

What do you think? Will the Ford Mustang change that much?