What happens when a gamer becomes an engineer? That engineer marries the two worlds together into a cool performance part. Exhibit A is a 3D printed, vibrating shift knob that tells you when you need to shift. 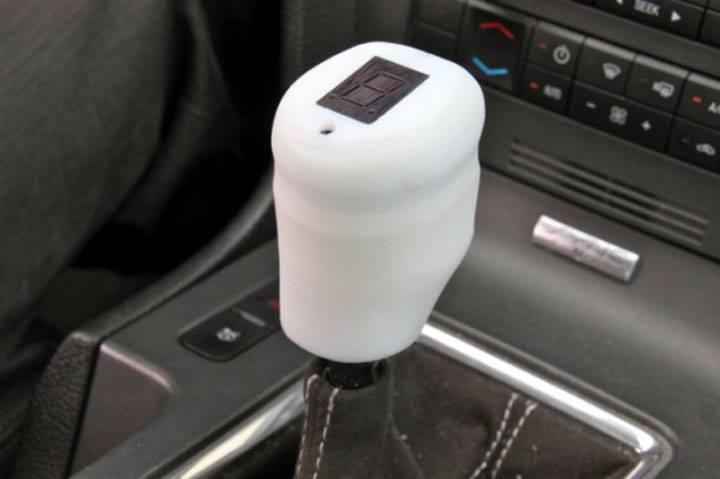 Want to improve your driving skills? Check out this new shift knob - it vibrates when it is time to shift.

Ford has been one of the pioneers in creating an open-source platform to develop Apps for its vehicles. The idea is that people all around the world can develop useful car Apps. One of these new Apps is this shift knob. Basically, a young Ford engineer named Zach Nelson, took advantage of this platform by combining an Xbox 360 motor, 3D printing and a tablet. The result is a shift knob that vibrates when you need to shift.

"I wanted to create something that expands the car’s capabilities and improves the experience for the driver,"
said Nelson. "I decided to use OpenXC to provide a new kind of feedback for the driver through the shift knob."

The goal of the shift knob is many things including driving a performance car like a Mustang at its peak. This means if you are a performance driver, you can set the knob to vibrate when the car reaches the red line (at its peak time). If you are looking for better fuel economy, the knob will vibrate when it is optimal to say fuel. It is also useful for teaching new drivers how to drive a manual transmission (a quickly, disappearing skill).

In order to create the shift knob, Nelson began by modifying a digital model of a Ford Focus ST knob. He was able to create a hollow shell that was printed with a MakerBot Thing-O-Matic.

Next, he added the vibration parts from an Xb0x controller and added an Arduino controller complete with LED display/lights and a mini-USB port. Then, he tapped into the car's OpenXC system to get data from the car including shift points and RPM. Putting it altogether, he can quickly remove the old shift knob and install his new one. Then, after a little bit of calibration based on the vehicle, he is ready to roll.

"OpenXC is a great platform for developing connected apps and aftermarket upgrades, or quickly prototyping features that could eventually be incorporated directly into the vehicle," Nelson says. "The basic concept of my system could be integrated directly into the car, and used on automatic-transmission vehicles with paddle shifters with electric power steering."

Performance cars are some of the most modified vehicles in the world with items like custom exhaust, computer tuning chips and wheels. Could a new shift knob be a "must-have" item? You bet!