GM says the new Silverado will offer four doors in the extended cab joining the Ram 1500 that already offers it. Will the 2014 Ford F-150 extended cab have four-doors? 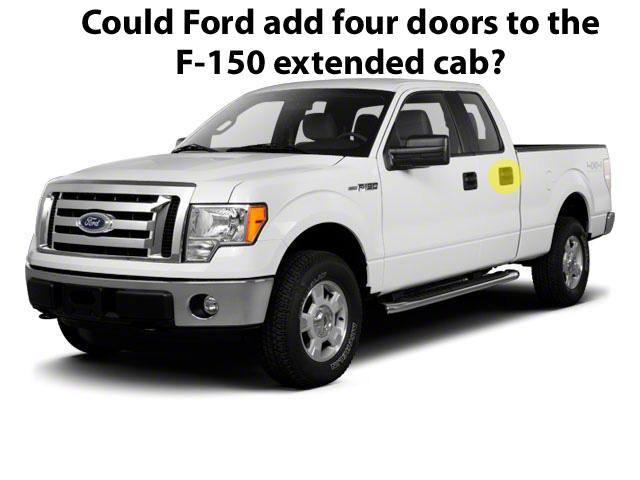 With GM and Dodge offering four doors in their full-size extended cab pickups, is Ford's F-150 next?

Currently, the Ford F-150 extended cab has the third-door option that has been synonymous with extended cabs. Dodge switched things up when it introduced the quad-cab option with four doors instead of the third door. They also offer a crew cab as well. The four-door configuration  is all about the passenger comfort of getting in and out of the truck. Plus, it is easier for retrieving items in the back seasts.

Now GM is introducing the Chevy Silverado with four doors. It will also offer a 6.5 foot box in the crew cab edition and will be 3-4 inches taller.

Anytime a competitor comes out with a new trim line or body style changes, questions arise about which ones other competitors will copy. Could it be the slightly larger, more convenient four-door extended cab? Does this mean the new Ford F-150s will start coming with four doors in the extended cab version?

In contrast the other automotive trend has been to build smaller, more fuel efficient vehicles. The automotive industry is currently going through a sales boom lead by this type of vehicle sale. Adding four doors and creating a larger pickup might seem appealing to some, but is that the future?

Right now the idea of adding four doors to the F-150 is purely speculation. It isn't an automatic thing for Ford to add since they have been the industry leader in full-size truck sales for years. The argument is why should they change their lineup to compete better when they are already the industry leader?

What do you think? Is a four-door extended cab the best way to stay competitive in the full-size truck market?