It’s just one little teaser image, but Ford fans are already losing their minds over it: The 2015 Saleen Mustang S302 is going to be one bad horse. 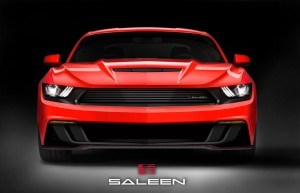 Saleen and the Ford Mustang

For decades, Saleen has been offering high-performance versions of the Mustang. It was actually in 1985 that Steve Saleen put the first certified supercharger on a production model Saleen Mustang. This car was the first late model Mustang to get a centrifugal supercharger.

A year later, in 1986, Saleen entered the Sport Car Club of America Race Series with a beefed-up Saleen Mustang. Naturally, the car was a winner and this propelled the Saleen modified Mustang into popularity.

During the 90s, the Saleen modded Mustang was in increased demand and they responded by raising the bar. Their notable involvement with the Mustang in the 90s included a S351 engine and unusual partnership with Tim Allen to form a race team.

After the turn of the century, Saleen continued to flourish, but company changes have left many to wonder what would come of the Mustang/Saleen partnership.

2014 Saleen Mustangs are available as:

We now know that the Saleen Mustang will continue into Mustang’s newest generation. At the beginning of July, Saleen released an image of what the next generation of Saleen treated Mustang will look like.

The first image of the Saleen S302 will have a dramatic front-end with flared fenders and scooped hood. It’s also going to be rocking a custom lower valance and a blacked out grille for a super sinister look.

What’s under that hood and hiding on the car’s profile is anyone’s guess, but smart money is it will be big!

In a statement, Saleen shared “We feel this latest Saleen mustang model is perfectly positioned as the next American exotic, campaigning on the world stage...As a first look, the final features and specifications of the 2015 S302 Mustang will be released as our unveiling and production draws nearer.”

So try to keep calm and wait for more details to arise, as they seem to soon be on the way.