Since PickUpTrucks.com declared Mopar’s Ram Runner the winner over Ford’s F-150 SVT Raptor in their recent “Duel in the Desert” race, popular 4x4 internet forums have been bombarded by fans of both vehicles vehemently swearing that their favorite is the better of the two. 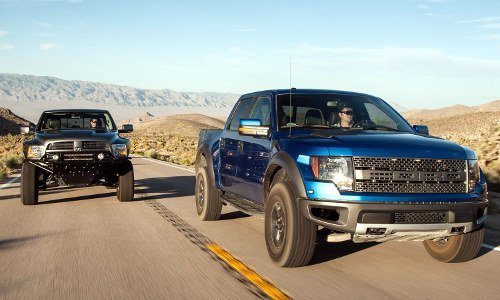 Was the Raptor vs Ram Runner comparison fair? Image courtesy TruckTrend.com (click the image to see the original).

To put it mildly, Raptor enthusiasts weren’t in the least bit excited to see that the Ram Runner won the race, and they’ve been airing their grievances both about the way the race was set up and about the Ram Runner ever since. Though some are saying that they’re suffering from a bit of “sore loser syndrome,” they’re actually putting up a pretty good fight and have definitely raised some valid points.

First among them is the difference in price between the two. The Raptor is a factory-built pickup truck ready to off-road upon leaving the dealership, and on the other hand, the Ram Runner is an aftermarket, lift kit-applied custom machine. According to PickupTrucks.com, the Raptor entered in the race had a total price of $50,670 after interior luxury features were added (think heated seats, radio upgrade, navigation, etc.) to its $43,720 base price. In comparison, the Ram Runner in the race cost a whopping $68,000. Because none of the added features on the Raptor were influential in regards to its 4x4 performance, essentially the “Duel in the Desert” was between trucks with a $24,280 cost differential.

As far as the course goes however, the race was split into four parts and each truck won two. The Raptor, as expected, did better in flatter conditions where it could use its more powerful engine (411-hp 6.2L V8 with 434 lbs.-ft. torque) and its superior traction control system, which allowed it to reach a top speed of 79.1 mph to the Ram Runner’s 75.8 mph.

On the other hand, the strength and flexibility of the Ram Runner’s shocks and front suspension springs carried it through the slower, bumpier first and last sections quicker and with much greater ease. Though the Raptor only bested the Ram Runner in the sections it won by a few seconds, the Ram Runner won the first and last sections of the race convincingly. Because approximately half the course was flat and half was bumpy, contrary to what Raptor fans are saying, it seems PickupTrucks.com did a fairly good job of mixing the course up and eliminating any advantages either participant may have had due to geography.

Though Raptor fans are having a hard time admitting their truck lost the race, those who have finally comes to terms with it are insisting that nevertheless—the Raptor is the superior vehicle. Calling the Ram Runner a “toy,” they argue that had PickUpTrucks.com compared the two trucks in additional categories like reliability, safety, non-timed off-road challenges, fuel economy and on-road characteristics like handling and stability, the Raptor would have been the clear winner.

While we’ll have to wait and see if a more thorough head-to-head comparison is ever made between the two trucks, despite losing the “Duel in the Desert,” the much better looking Raptor’s still got my vote.

This post was contributed by Brittany Larson on behalf of TRUCKMAX.