One of the most overlooked parts on the Ford Power Stroke Diesel engine is the Fuel Injection Control Module. Could you be losing power, fuel economy and overall performance due to a faulty FICM? Ford has developed an OEM replacement part that could restore your diesel engine back to full power! 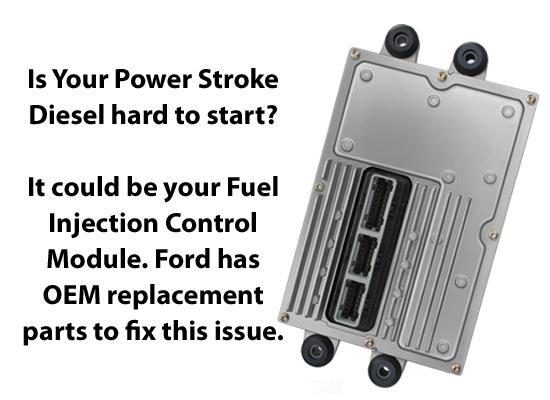 Quite often, when a Power Stroke loses power or has a harder time starting, owners chalk it up to the engine getting "old." This isn't always the case. Quite often, the FICM has simply gotten worn down and it is time to change it.

What is the FICM?

The Fuel Injection Control Module sends an electrical impulse to the injector, "to deliver the correct amount of fuel to the engine cylinder at the precise moment it’s needed. It’s vitally important to the engine’s performance and fuel economy," according to Ford. The module is powered by a DC-to-DC voltage converter.

Quite often, the voltage converter in the FICM will deteriorate due to age and or dead or dying batteries. This in turn will cause the truck to not perform as well. A sure sign of this is when the truck becomes harder and harder to start. Often you will have a simple fix called a half-shell replacement. If that doesn't work, you are going to need a new FICM. 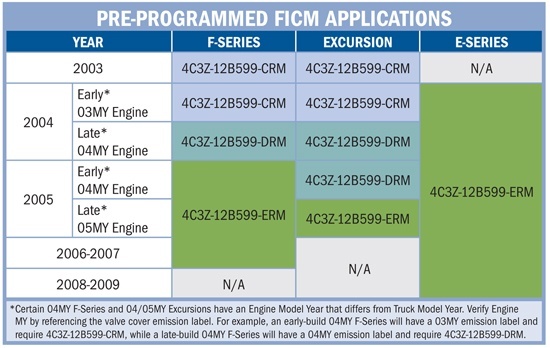 A complete FICM replacement that is pre-programmed to be replaced in the field. Just do a quick swap of the old with the new and then the engine should be back in service. This allows you to bring it back into the shop for to perform any programming at the shop.

Half-Shell FICM
The half-shell FICM replacement is less expensive than a full FICM and in 90 percent of the cases, this is all you will need. This kit replaces the DC-to-DC voltage converter which is the item that most commonly causes problems due to age.

Full, Field-Programmable FICM
This FICM unit is for some F-650/F-750 and LCF applications that need a full, field-programmable FICM. This technician programmable  unit can be custom-programmed by using a scan tool programming function.

These Ford FICM options will have you up and running in no time. And since they all come with Genuine Ford Parts, you can rest assured you are using quality parts.