The next time someone makes fun of your grocery go-getter, go ahead and buy a VelociRaptor from Hennessey Performance. It seats eight, cranks out 600 HP with a supercharger and goes 0-60 in 5.9 seconds. Who is laughing now? 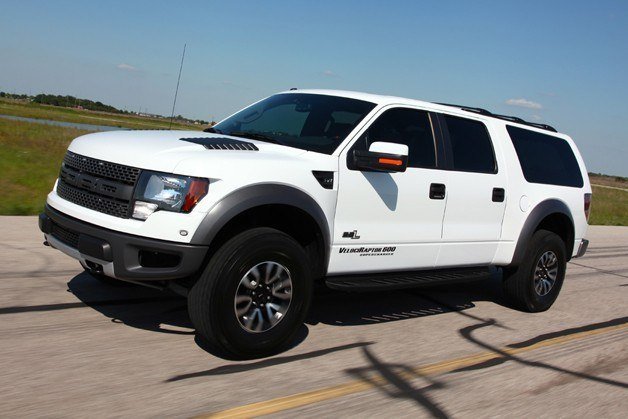 Is it a truck, SUV or both? One thing for sure is that it is a really cool vehicle!

Hennessey Performance pretty much took a Ford Raptor and married it with an Excursion. The result is the ultimate SUV on the market. Although, what market isn't quite clear with a selling price of $149,500, according to Autoblog.com. It even has the cool name of VelociRaptor.

The truck is powered by the stock 6.2-L V-8 that is rated at 411 HP. You can add a supercharger to increase the horsepower to 600. With all that power, off-roading should be awesome. Yet, Hennessey says that the off-roading capabilities aren't the same. Essentially the SUV Raptor is now good for "on-roading and moderate off-road duties." Sigh.

Making this monster even cooler is that it will be a limited edition build of just 30 units. We are guessing they will sell more than that.

What do you think? Is it the perfect marriage or a ridiculous SUV?