Edmunds.com has reviewed the 2013 Ford Mustang V-6. While it found it lacking in a few places it still says; "American's keep coming back to this pony car because, it is an iconic machine that still remains cool." Yep, it is cool, really cool.

The V-6 Ford Mustang is really a bit of a compromise car in that the smaller engine has less horsepower yet better fuel economy. Ford offers this version for those buyers who want to drive the legend and not spend more money at the pump. Edmunds.com video review of the Ford Mustang V-6 points out that it is still fun to drive though.

While Edmunds feels that the best way to drive the Mustang is with a manual transmission, many of the V-6 models come with an automatic transmission. Yes, the manual is better suited with the Mustang engine, quite simply, many V-6 drivers just want to drive the car not take it to the quarter mile. 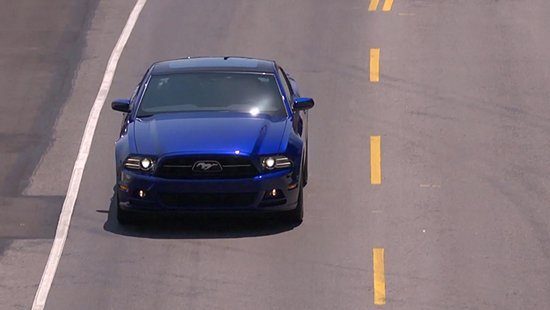 Edmunds.com reviewed this 2013 Ford Mustang V-6. It found lots of things to like.
One knack that Edmnuds has is that it felt the handling could be a little tighter. It felt like the Mustang just didn't corner as well as it could. And Edmunds said, "unlike the more sophisticated Genesis Coupe, the Mustang isn't a true sports car." One would wonder if Edmunds doesn't view it as a sports car, why knock it for not cornering tighter like a sports car?

The ride though is "plush" according to Edmunds. It says the performance packages will help the shortcomings of the V-6 like tighter handling, but they also will diminish the ride.

On the inside, the ability to change colors on the dash as well as the comfortable room in the rear seats garnered some praise. Although the trunk space left something to be desired, to be fair, it is a sports car not meant for lots of storage room. Oh and Edmunds found the door pockets as not useful at all.

In the end, Emunds gives it props for fuel economy, good safety test results and for still being an iconic American legend that drivers will find fun to drive. Isn't that what the V-6 version is really aiming for?