Baja Trophy Trucks are meant for serious off-road racing. But, just how fast are they when compared to other vehicles like the Ford Raptor or Ford Mustang. You would be surprised.

Hot Rod Unlimited came up with this interesting idea of pitting the fabricated race truck against the Raptor and the Mustang. Driving the Desert Assassin Trophy Truck is Cameron Steele who runs in the SCORE off-road race series sponsored by Monster Energy and Yokohama tires. He is an accomplished driver with a well-built rig. 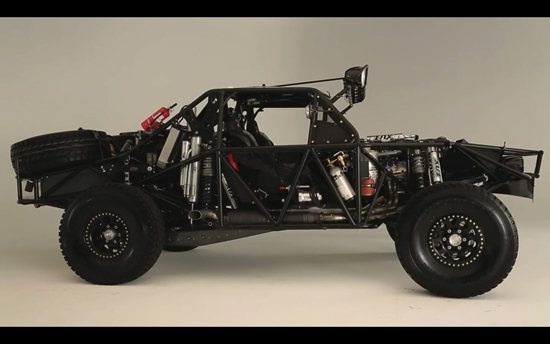 The crew removed the paneling on the Desert Assassin Trophy Truck showing the guts that really get this truck moving.

The final result is pretty surprising and just shows how powerful the Trophy Truck really is. The fabricated Trophy Truck left the Raptor in the dust, but the Mustang smoked it during the quarter mile and the Willow Springs International Raceway.

The big reason it blew away the Raptor is due to its impressive engine that produces 800hp. While the extra weight of the big tires surely slowed it down, it is just extremely powerful. The way it corners though was also impressive considering again the weight and low end torque. Running the Willow Springs section just a few seconds slower than the Mustang which is built for cornering really gives you an idea of what this machine is capable.

One does wonder, how the Mustang would do off-roading? Ok maybe not.