There has been a LOT of speculation lately about Ford building a new F-series truck - a smaller, more fuel efficient F-100. Could it be true? 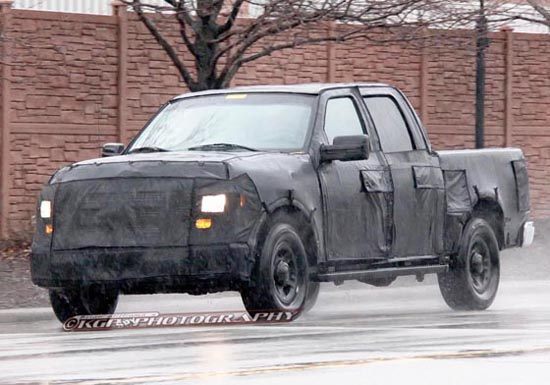 Is this a new F-100 pickup that Ford is building? Photo Credit KGP Photography.

Ever since Ford decided to pull the plug on the Ford Ranger, there has been a lot of angst among compact truck buyers. Why would Ford end a very successful truck program? The thought Ford had was that all of their Ranger customers would simply buy the larger F-150. The reasoning was that that fuel economy and sticker price were comparable. In some cases that has happened, in other it hasn't. It seems now the rumor of a F-100 being built is gaining traction according to Pickuptrucks.com. This could be Ford's way of capturing the compact truck customers it has been losing.

What makes the spy shooters think it is a F-100? Here is what they say:

We caught a small convoy of heavily camouflaged Ford prototypes running the streets of Dearborn, Mich., possibly revealing one of two things: 1) These are the first prototypes for the 2015 Ford F-150, or 2) perhaps this is our first look at the Ford F-100, a smaller new product.

Caught in both SuperCrew and SuperCab configurations, the prototype trucks hide most of their styling details while also making it difficult to draw size and packaging conclusions. However, as these photos suggest, this truck is smaller than an F-150, pointing to the real possibility of a new, small Ford pickup. Here’s what we’re left with: 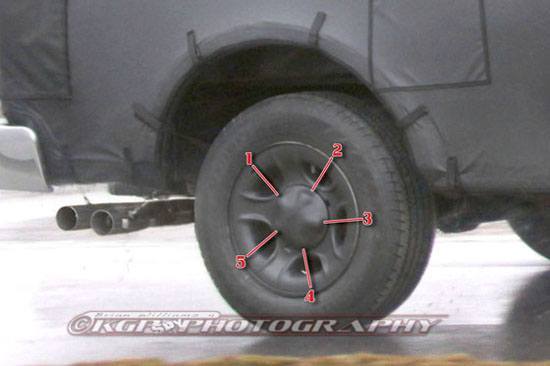 Does this 5-lug pattern indicate a smaller pickup?

One of the prototypes was wearing wheel caps that suggest a lighter-duty, five-lug pattern instead of the F-150's six-lug specification. One prototype’s caps show there are five small protrusions, suggesting five lug nuts in a pentagon pattern.

The SuperCab prototypes had a split two-tip exhaust, similar to Ford's Power Stroke Super-Duty trucks, suggesting that this may have a smaller diesel engine — possibly the 3.2-liter turbodiesel inline five-cylinder that will be available in the 2014 Ford Transit vans. 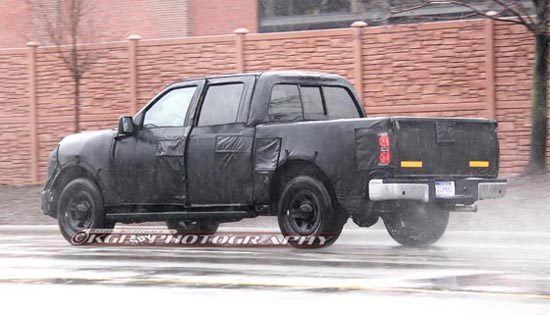 Evidence of a Narrower Track?

Viewing the prototype trucks from the rear, it appears the camouflage adds some width, giving a false sense of the trucks’ actual size. The tires appear to sit well within the arches, suggesting a narrower track and smaller overall footprint than an F-150.

The fact that Ford's future truck programs are now moving beyond the mule stage is undeniable. These prototypes were out braving very sketchy weather and road conditions all around Dearborn. The subtle cues that suggest that these trucks are slightly smaller and a bit less robust than a full-fledged F-150 are consistent with reports that an F-100 is in the works. It’ll be around a 9-to-10 scale F-150; it’s also likely to use many new lightweight materials and offer much greater fuel economy. An all-aluminum F-100, with a lighter-duty suspension, wheels and other components, would realize significant fuel-economy gains while satisfying the needs of most truck buyers. And don’t forget a truck like this would greatly help Ford meet the stricter corporate average fuel economy standards in both 2016 and 2025.

The truth with Ford is that they need to sell pickups, lots of pickups. The European sales division is losing money, cars don't have as large of a profit and there really isn't anything else that has the same profit margin as trucks. Ford trucks are renowned as being a tough work truck and they also are Ford's bread and butter. Losing truck sales to competitors, even compact truck sales, isn't good for Ford at all.

It then makes a lot of sense for Ford to offer a F-100. It could be built on the same platform of the F-150 while offsetting the loss of HP and torque with increased MPGs. This would help Ford in two ways. First, it would help them meet their CAFE fuel economy goals. Second, it could help recapture some of the upset Ranger customers.

Let's be clear that this truck won't be a "work"-truck. It would really be a more around town truck with the occasional payload use. These trucks are very useful for people who need a truck at times, but could drive a car most of the time. They are also good for the commercial customer who needs better fuel economy like Orkin. The pest control company used to buy/lease thousands of Ford Ranger pickups each year for its fleet. They needed a small truck everybody could drive with just enough bed space for their tools. They have since switched to the Toyota Tacoma after testing all the trucks including the F-150. They said the F-150 was simply too big for their needs.

Simply put, Ford might have made a big mistake by ending the Ford Ranger. Many forum posters and comments on this website point that out. The F-100 could be the best decision Ford has made since then. Hopefully, it will be more than a rumor and fill a void in Ford's lineup.