In a huge PR blunder for Chevy, a Ford SuperDuty was used to help setup an exhibitor booth at the Texas State Fair. Guess somebody forgot to ask the contractor if they drove a Chevy. 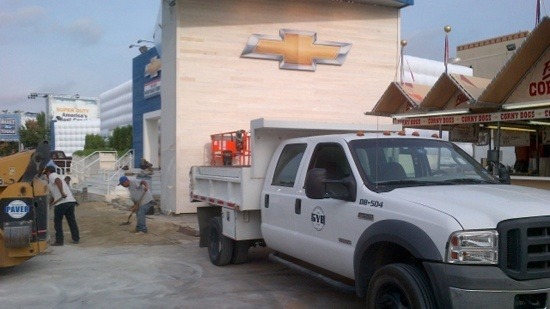 Can't imagine Chevy's surprise in seeing this photo from their booth at the Texas State Fair. No mistaking the Chevy booth and the Ford SuperDuty.

The photo from Jalopnik says it all. Real construction workers using a newer looking Ford SuperDuty as they setup the Chevy booth. It is extra special that the Chevy Bowtie is seen just above the Ford truck.

While everyone knows that Ford sells a ton of fleet vehicles and many construction crews use them, didn't Chevy at least take the time to ask the obvious question of what truck the contractor owns. No doubt that question would have saved this egg-in-the-face moment from even happening.

The other question is what was the contractor thinking? Probably not much. This is no doubt a lucrative contract for them and the Texas State Fair is an annual event. It would be a safe bet to assume that Chevy will probably not give them the job again.

Is this photo really saying more about a bigger issue for Chevy? In that real construction workers prefer the Ford full-size trucks to Chevy's lineup. If Chevy is wondering why they just can't seem to sell as many trucks as Ford, maybe they need to print out this photo and hand it to every engineer they have.

Maybe Chevy knows that Ford SuperDuty trucks are the right truck for the job!