The automotive experts over at Pickuptrucks.com have finished their extensive 2013 Light-Duty Challenge. The winner? The 2013 Ford F-150 XLT SuperCrew of course! 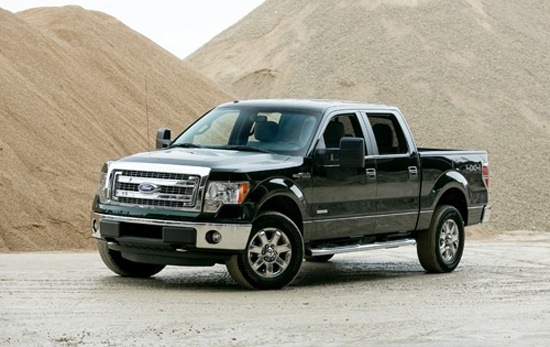 The Ford F-150 has won the 2013 Light-Duty Challenge. This intense competition was put on by PickupTrucks.com and is a great achievement for the top-selling truck.

The Ford F-150 is the undisputed top selling truck for years and it's superiority has been confirmed once again. The 2013 Light-Duty Challenge win is quite an achievement considering the extensive tests and great competition.

For the competition, PUTC's requested "all test trucks had to be four-wheel drive, have four full-size doors, be able to tow at least 8,500 pounds, and the total as-tested price had to be below $45,000 (including destination charges)." They also enlisted the help of the automotive and technology experts at Popular Mechanics.

They gathered these trucks:

A winner was determined by giving each truck a score out of 1-10 in six seperate areas: interior quality, layout and features; exterior quality, fit and finish, and features. The judges also scored the trucks based on value for the money (1 to 100). Then, the did testing for the other points. The tests included:

In the end this is what they found:

Say what you will about the F-150, but as the biggest-selling half-ton in the U.S. offering the most engine choices and trim packages in the class, you had to think this was the favorite from Day One. Although the F-150 hasn't won a PUTC comparison test since the 2010 V-6 Work Truck Shootout, we should note we're not counting last year's Ultimate 4x4 Shootout because the Ford Raptor is in a class by itself. The performance in this well-equipped XLT SuperCrew with its Max Tow Package was, quite simply, dominating. In the quantitative section of our test, with 13 different performance tests and max rating calculations, the Ford outdistanced the competition by a significant margin. It won five competitive events outright and came in second in six others. However, in the qualitative section of our testing, the Ford's domination fell short. In fact, even though the F-150 did not garner any harsh criticisms, the XLT interior was clearly not up to the levels seen in the new GM trucks and Ram 1500. After the judges' scores were sorted, the Ford never received higher than a third-place finish in this section, winding up in fourth place overall in our qualitative portion of the test. But this contest wasn't only about what a few experts think, so now that all the dust has settled on one of our most thorough and exhaustive half-ton pickup truck comparison tests, the 2013 Ford F-150 is PickupTrucks.com's 2013 Light-Duty Challenge Champion by 11.5 points more than the Ram and 15.75 points more than the GMC. Congrats to Ford and to all of our competitors, because this was one crazy, brutal battle royale.

Congrats to the Ford F-150 for once again being recognized as an outstanding truck!

What do you think? Is the Ford F-150 the best truck period or what?