The 2013 Ford Mustang GT 500 Super Snake pricing is out and it comes with two different package options.  This limited edition American-made beast of a muscle car isn't cheap, but then again who cares when buying this gem. 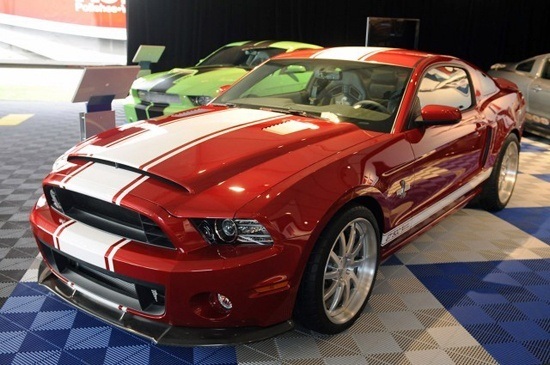 Pricing is now available on this amazing 2013 Ford Mustang GT 500 Super Snake. It could be one of the most beautiful American-made muscle cars being built today.

MotorAuthority checked one out in Pebble Beach and made the following observation, "One of the key upgrades will be a new 5.8-liter V-8. Composed almost entirely of aluminum, and featuring cross-drilled block and heads, this engine in the regular 2013 Ford Mustang Shelby GT500 already lays claim to being the most powerful production V-8 in the world, and the modifications made by Shelby American should only make it more of a beast."

While the 662-hp is a good package, the 850-hp package is the monster snake, it is historically the fastest Super Snake yet. It comes with either a Whipple or Kenne Bell supercharger.

While it hasn't been released, the bet is that both packages will have:

Adding to power is a powerful sound coming from the Shelby/Borla exhaust.

Cosmetically you will have the option to add stripes to either the rear only, hood and rear in black or white. Also, it available are 20-inch spoked wheels designed by Shelby as well as Wilwood brakes.

Would do you think? Is it really cool or is it just us?